I’ve selected some photos I took during two trips to Nicaragua in 2010 and 2011 with a volunteer group from my high school. Travel with a focus on humanitarian work has become increasingly popular in recent decades, especially among students, and images of children living in poverty in underdeveloped countries are often used to encourage volunteering or solicit donations to humanitarian projects. Criticism of the manipulative nature of such images, which are meant to appeal to the audience’s emotions and elicit sympathy, is prompted in We Need New Names, when Darling and her friends pose for the photographers from the NGO, and by photo exhibits like the one from the Salvadoran Civil War we looked at in class. For one thing, there’s the question of the ethics of taking photographs without necessarily asking the subjects’ permission or giving them any control over how the images are used or distributed. Furthermore, our discussion of cosmopolitanism and the way it is tied up with privilege made me think about the larger question of the trips themselves, and whether they focus more on the volunteers’ experience than on the people who are supposed to benefit from the work being done. In a way, these pictures are nothing more than souvenirs; after nine days of building houses and distributing clothing donations, I was able to come back to the U.S., take a hot shower, and get on with my life without ever having asked these children’s names. 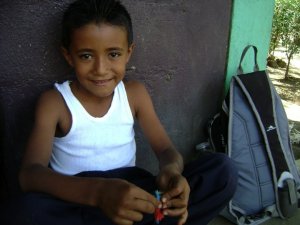 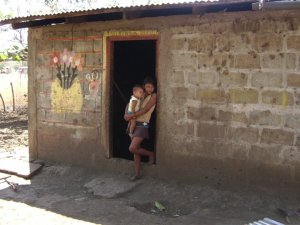 One thought on “Voluntourism: A Focus on Faces”