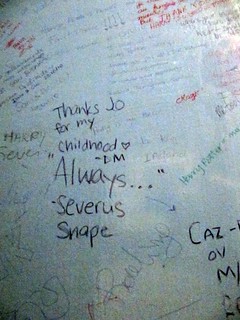 The Elephant House in Edinburgh, Scotland describes itself on its website as “made famous as the place of inspiration to writers such as J.K. Rowling,” as though visiting the same coffee shop, drinking the same tea, and occupying the same seat as Rowling once did can allow fans to share in the experience that led to the birth of the Harry Potter series.

What the website does not depict, however, is the shrine-like bathroom where countless Harry Potter fans have decided to express their gratitude to Rowling across the walls of a space that is not technically hers; instead, the fans have decided that this place represents a spot where they intersect with Rowling and the presence of the world she created. While most, if not all, of the comments have been written by English-speaking visitors, these walls still represent the idea that people from around the world have all made their way to this particular space and have used it to pay homage to the books that they have experienced in both personal and collective ways. This seems to indicate that Rowling’s series has transcended enough literal and figurative boundaries to have made an impact on a worldwide generation of childhoods. That the Elephant House has left graffiti (even of the friendly variety) on the walls, rather than focus on any legal right to their property, shows the respect the shop has for fans using this space to make a concrete connection to an invented world.

(Photo credits to http://travelcuts.com/blog/how-to-get-that-perfect-photo-take-dozens-of-bad-ones/, https://www.flickr.com/photos/starycat/5148505505/, and http://crystalinscotland.blogspot.com. These are just some of the images of the walls available online, if you want more of a time-lapse.)

3 thoughts on “The Elephant House”